And There Was Heartache 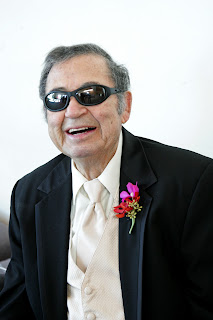 A week ago my beloved father died...

You'd think that it just happened. The loss is deep, heartbreaking and all-consuming. The pain is great, the yearning huge and the tears never ending. He'd been sick for nearly a year-- he was strong and determined-- but in the end the cancer that he tried to beat won. When the end came, I think he found peace. His last 24 hours, he slept peacefully until he finally drifted away.

There is so much to say about my father, yet the words aren't flowing. He was a passionate, kind, strong-willed, stubborn, generous, loving and wonderful man. As we prepare for his funeral tomorrow, I sit here quietly reflecting on my father's life and feel such a huge void in my life. I am not alone as I grieve and I am not alone in my loss, but my world has suddenly gotten a whole lot smaller. My father, that larger than life figure, is gone. I still see his face when I close my eyes and I can still hear his voice in my head, but to know I cannot touch him physically anymore breaks my heart.

My faith is weak, yet I believe that there has to be something beyond this life, beyond this vale of tears. I think, as I was watching him slip away these last few weeks, I caught a glimpse of what just might be beyond this life. I think he could see that there was something beyond this world; it was like he was reaching out to his siblings. The loved ones that have gone before him. Maybe he could see his mama and his papa. Their names rolled off his lips like a litany of prayers, it seemed like  he could see them calling out to him, yearning and waiting for him as he reached out and tried to touch them off in the distance. Thinking that gives me peace anyway.

I have great memories of my father. We'd spend hours star gazing, going for rides, talking on the phone or watching the Lobo game. He was passionate about sports, politics and loved the Golf Channel and used to watch General Hospital. On Saturdays, he loved getting up and going to breakfast at the Village Inn. He taught me all about love, morality and respect. We argued like cats and dogs but we always made peace. He was stubborn and opinionated and knew how to do everything, yet he taught me so much. He was just and kind. We always managed to have a laugh or two. Sometimes, I felt like the son he always wanted, but honestly,  I think he liked having a girl better. He treated me like a princess, yet I grew up independent and strong because of him.  Yes, he spoiled me rotten, but he also taught me about the value of work and an education. He always wanted the best for me and even when I failed, he never failed to tell me he loved me. I am a better woman because of my father and I cherish him deeply. He cried on my wedding day, but I think he also know that I was marrying a good man, a man who like him, I loved and adored. And I know he was happy that day as well. 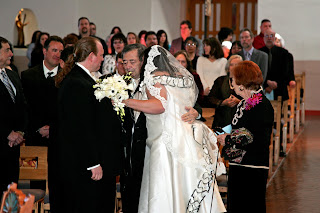 So tomorrow, we celebrate his life with a Mass of Christian Burial and then we lay him to rest at the Santa Fe National Cemetery. I'm not ready for it; I'm a little saddened by the thought of it, and I'm a little scared. I know I can "live" without my daddy. That's the nature of life; children usually bury their parents, but I'm just not ready to let him go.

Here is a slide show I put together in his honor.

And this is the obituary I wrote for him.

Roman Jose Salazar, 84, a life-long resident of Santa Fe, died peacefully Tuesday, Nov. 13 at his home after a lengthy illness. 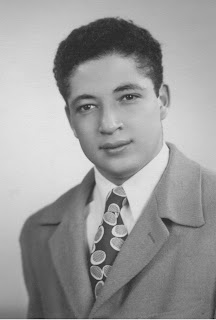 Roman was born in Española, NM, on April 17, 1928.  He was the youngest of seven children. He came to Santa Fe as a young boy to live with his brother Ramon and wife, Dulce, so that he could attend St. Michael’s, where he attended from elementary school through high school. He excelled in football and basketball and was captain of both teams his senior year. He was also a member of the Sodality of Mary. He graduated in 1947. He received a scholarship to St. Mary’s College in Moraga CA, a small university run by the Christian Brothers. He received a football scholarship, but the intention was for him to play basketball as a walk on. He played a season of football, but was sidelined after a knee injury. Soon after his second semester of college, he returned to Española to help care for his sick mother. He then worked at various jobs, mostly as a carpenter, until he was drafted into the US Army in 1951. He served for two years and was honorably discharged with the rank of Corporal in 1953. 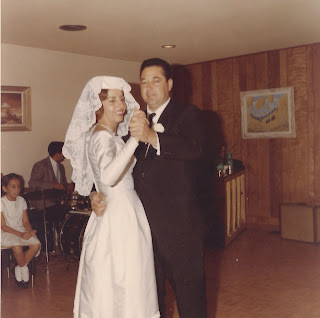 He enjoyed the life of a bachelor until he finally found a soul mate, in Theresa Olivas. In 1965, they married and few years later, they had one daughter, Maria Feliz. They had great adventures as a family. He enjoyed playing sports of all kinds, but found his passion playing golf. He spent many years happily playing the links at the Santa Fe Country Club, winning many tournaments with his best friend Lee.  He also enjoyed watching Lobo basketball and attended as many games as he could at the Pit with his daughter.  He retired from Public Service Company of New Mexico in 1988 after nearly 30 years of employment.  He loved tending his garden, most especially the greenest patch of lawn in town. He enjoyed spending time with friends and family. Wherever he went he always bumped into a friend.


He is preceded in death by his parents Pacomio and Vincentita Salazar; brother Ramon Salazar; sisters, Cleofas Salazar, Antonia Martinez, Celida Maestas, Elizama Brazeal and Romancita Salazar. He is survived by his wife of 47 years, Theresa Olivas Salazar; daughter Maria Feliz; son-in-law David Duran and beloved poodle, Noche. He is also survived by special friends, Lee and Sara Sanchez and their children; many nieces, nephews, great nieces and great nephews.


The family requests that in lieu of flowers, donations be made in his name to the Tuition Assistance Fund at St. Michael’s High School, 100 Siringo Rd., Santa Fe, NM 87505. 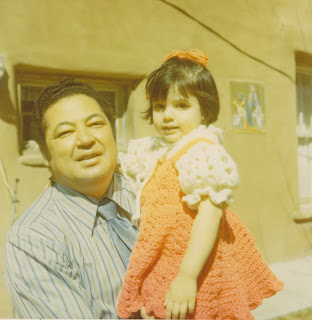 I love you and will always miss you, Daddy.
Peace and love to you on your new adventure.

Newer Post Older Post Home
Subscribe to: Post Comments (Atom)
"One opens the inner doors of one's heart to the infinite silences of the Spirit, out of whose abysses love wells up without fail and gives itself to all." -- Thomas Merton.