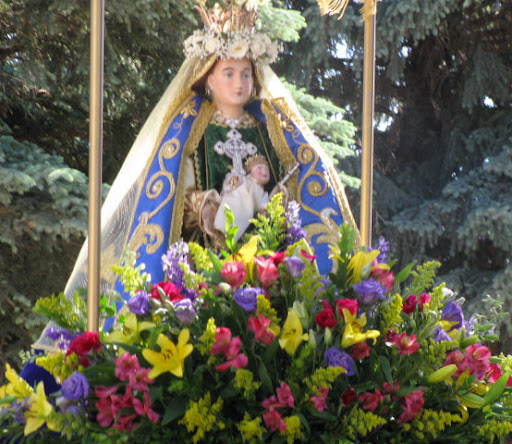 Hard to believe
that another year's Novena in honor of La Conquistadora has come to an end and that it's already been a month since it ended. (I wrote this post a month later but backdated it.) For approximately, 300 years, the faithful of Santa Fe have been making this novena in Thanksgiving. (see links on sidebar for some history. I've yet to put it all together in my own words.) I've compiled the links to the posts I made with my own reflections of the day. I posted pictures as well and they are listed below. I hope you enjoy getting a taste of what makes my Catholic Faith so special to me.


It always begins with Vespers at the Cathedral, then the procession follows and we wait for the First Mass to begin the next morning at 6 a.m.

My First Thoughts after the First Mass of the Novena.

A Beautiful Day, reflections after the Second Mass.

It's almost like touching a bit of heaven. Thoughts after the Third Mass

Reflections on the Sixth Mass

Giving Thanks To God, reflections after the Seventh Mass

Procession back to the Cathedral and the 8th Mass of the Novena.

Lastly, the 9th Mass at the Cathedral. As beautiful as it is, it's sad because it's over for another year.

And now for a few grumpy thoughts and part of why I compiled this directory post of sorts. 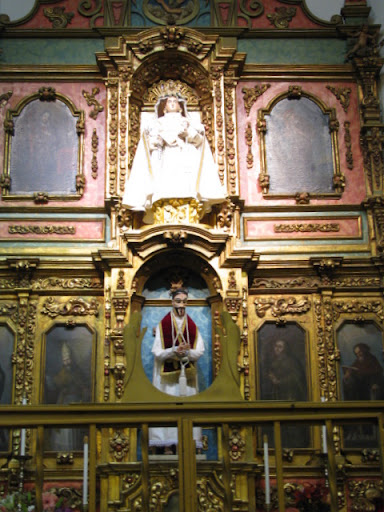 The other night I stumbled on a very critical post about my hometown's beloved statue of the Blessed Mother and it kind of pissed me off and I can go on and on about why, but that is not what this post is all about. I probably will write a post in response later, when I'm not so pissed. I'd make a comment on her blog, but the post was over a year old and I don't think it's worth the effort. Needless to say, why is it that people who know nothing about Catholicism, its history, traditions and culture, and no very little about New Mexico history feel compelled to make a comment about something they don't understand? She claimed to be a Christian, but I didn't find anything charitable or Christian about her commentary. Maybe others will want to learn something after seeing these posts.

I hope that if people stumble upon this blog and see these entries about La Conquistadora, they'll have a better understanding of why she's so important to the people of New Mexico and why she truly is Our Lady of Peace.

In case anyone wanders over to this post, the 2009 entries are here.
Posted by Maria at 6:22 PM

These people who make lousy comments on the Faith are beginning their Faith journeys. God is listening to them more intently now than we are. And he will do something.

There was this guy who hated Catholics. He gave an anti-Catholic book to his Catholic girlfriend and she said, "Thank you very much. I will never attend another Mass again!"

His Catholic grandmother died. He took her rosary and tore it to bits and threw it into the wastebin. He discarded her prayer book.

He swore he will work his hardest against Catholicism for his whole life.

I think St Paul up there might be looking at this guy and laughing. His name is Scott Hahn.

Everyone who hates the Church now might be another Scott Hahn at the start of his Faith journey. We just pray for them.

[Those who read this and don't know who Scott Hahn is, please google his name. Or put his name in the Amazon.com Search box for his books.]

Hi Anon!
Thanks for stopping by and leaving a comment. I do know who Scott Hahn is, but I didn't know that story at all. I think many times, hearts do turn and discover the truth. We can always pray and hope that happens. I know I have family who have left the church and are terribly negative about it. I have family who worry about their children and if they'll stray and there are many I know who are making their way back or to the church and yes they definitely need our prayers.

I also think St. Paul knows exactly what Scott was going through.
Maria

Newer Post Older Post Home
Subscribe to: Post Comments (Atom)
"One opens the inner doors of one's heart to the infinite silences of the Spirit, out of whose abysses love wells up without fail and gives itself to all." -- Thomas Merton.