Bible literalists make me dizzy. Just sayin'.
Posted by Maria at 11:23 AM No comments:

Sometimes when I’m doing something mundane like vacuuming or doing other boring albeit necessary chores my head starts writing. Sometimes it’s fiction, sometimes it’s an opinion about this or that but often it’s thoughts I’m trying to work through in my head.

So, bear with me while I try to articulate those thoughts. I’m welcoming 2013 whole-heartedly. 2011 and 2012 had some good moments, well great ones; I married the man of my dreams, but others were strife with illness, sadness and loss.

As I think back on the last few months, I think mostly about watching my dad as life for him was coming to its end. There isn’t a day that goes by that I don’t think about him, hear him or miss him. As I was straightening up in the bedroom, I heard a voice. If I didn’t know any better, for a few minutes I thought it was my dad. I had the dogs
outside and the house was quiet as I was dusting. Often, he’d come over to the house when I’d be in the middle of doing something mundane just like I was today. For a minute, it felt like one of those days. He’d come over to the house and usually honk the horn to alert me he was here. He rarely came inside—and when he did, he always complained about the dogs jumping on him or leaving hair all over him. It didn’t bother me. I’d do my best to shuffle them out to the backyard. Still, today, they were outside and I thought it would have been a good day for him to come check on me, but I know those visits are long gone. 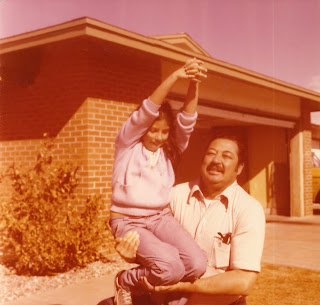 Sometimes, I’d get so annoyed with him. We fought like cats and dogs, but he was my best friend. We’d watch Lobo games together; we’d discuss politics and the news. We’d go for rides, we’d stargaze and we’d even stop at Sonic for a root beer float from time to time. No one will ever fill his shoes. No one will ever take that place in my heart. To say I miss him, well that’s an understatement.

Through all of this, relatives stopped by. They brought food. One of my cousins constantly stopped by with home-cooked food for my mom. She was a Godsend. My mom’s sister and brother-in-law also came by and stayed with Dad when Mom needed to go somewhere or they took her when I stayed. My other uncle and aunt brought Communion and another of my cousins came up to Santa Fe to help when she could. I had friends who did what they could do as well. Those friends and family will forever remain in my heart and have my gratitude for what they did for us. I had family disappoint me as well. There are moments of anger and frustration that I regret, there are feelings of bitterness I cannot let go and quite possibly not forgive. The messages that never came, the family who didn't attend the Mass and the  excuses that were never given, those will always sting. Maybe in time I'll let it go. Maybe in time I'll forgive, but for now, I don't have charity in my heart for them. It's probably a sin but I'm not ready to let it go.

Our former pastor was a blessing. He came over when we needed a priest and couldn’t get someone to come over to perform the sacrament of the anointing of the sick. He did that, and also gave Dad the Last Rites. It was a powerful scene. At that moment, I didn’t question or doubt my faith. Watching Dad as he received the two sacraments brought my mind to ease; he was aware of what was going on and participated fully in the moment. Peace seemed to wash over him and we were all comforted. It certainly meant more to me to have a priest, one that I knew well, come out to our house to pray, give my dad the sacraments than I ever imagined. I, too, felt some peace that day.

When Dad was lucid, we talked about everything and nothing at the same time. We fought. He was frustrated and didn’t like feeling helpless. But he recognized that we were trying to help him and do our best for him. He didn’t like being dependent on anyone else to help him with his day-to-day needs. Because he was strong, stubborn and difficult, we got additional help. Mom and I couldn’t have cared for him on our own. We tried. After a few falls, it was obvious that he couldn’t help us lift him or move him, so we knew we needed help. He had some wonderful caregivers and we are grateful to have had them. 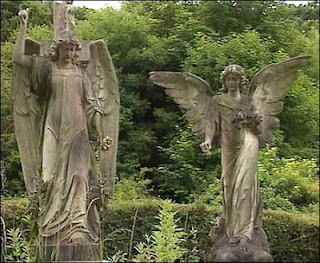 He’d call out for his loved ones who’d gone long before him. He’d say a litany of names: Antonia, Celida, Elizama, Mama and Papa. He called for his brother and he’d ask if someone was dead.

Often, he'd say he saw little kids in the room, sometimes gangsters and thugs who tried to rob us. He even told David he thought I was drunk and there was some guy passed out on the floor.

I think he saw Angels. I wanted to believe he did.

In the end, our Hospice team was outstanding, especially our nurse and caregiver. Her name was Charlotte, the name of David’s mother and she was gentle and kind. She was young but wise. She was with him when he died and she handled it all with grace. I think it’s somehow appropriate that someone named Charlotte was with him at that moment. We were prepared. I’d expected him to go the night before but he held on just one more day. Both Mom, the dog and I were away and I think he knew that was the time. He slipped away in his sleep and I think was at peace. I want to believe that his soul lives on and that somehow he’s in heaven watching over us with David’s mother sitting beside him. I think had they met in this life they would have been fast friends, so I hope in the next life she was there to show him around.

And when the day came, we knew he was no longer suffering, no longer in pain and at peace.

There are still feelings and emotions I have yet to work out. As I started writing this earlier today, I had focus and a grasp on things I wanted to say, but as daily distractions hit, I lost a lot of that. Later, I will have to come back and try to write some more.
Posted by Maria at 9:54 PM No comments:

Newer Posts Older Posts Home
Subscribe to: Posts (Atom)
"One opens the inner doors of one's heart to the infinite silences of the Spirit, out of whose abysses love wells up without fail and gives itself to all." -- Thomas Merton.